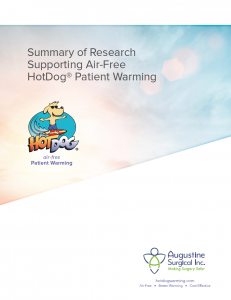 Legg, A.J.; Cannon, T; Hammer, A.J. Do forced air patient-warming devices disrupt unidirectional downward airflow? Journal of Bone and Joint Surgery Br. 2012;94-B:244-256.
“Forced-air warming resulted in a significant mean increase in the temperature (1.1°C vs 0.4°C, p<0.0001) and number of particles (1038.2 vs 224.8, p=0.0087) over the surgical site when compared with [HotDog®] warming, which raises concern as bacteria are known to require particles for transport.” (View The Abstract)

Legg, A.J.; Hammer, A.J. Forced-air patient warming blankets disrupt unidirectional airflow. Bone and Joint Journal, March 2013 vol. 95-B no. 3 407-410
“The waste heat from forced-air warming (FAW) torso blankets radiated through the surgical drape to form tornado-like vortexes of rapidly spinning air near the surgical site. The vortexes sucked contaminated air from the operating room floor and deposited it over the surgical wound. 2,000 times more contaminant particles were found in the air over the wound with FAW than with air-free HotDog conductive warming. With HotDog, only 1,000 particles per cubic meter of air were present. With FAW, the particle count was 2,174,000 per cubic meter, an increase of 217,300%.” (View The Abstract)

Albrecht M, Leaper D, et al. Forced Air Warming Blowers: An Evaluation of Filtration Adequacy and Airborne Contamination Emissions in the Operating Room. American Journal of Infection Control, 2011; 39:321-8.
Micro-organisms were cultured from the internal air-flow paths of 92.3% of forced-air blowers. 58% of the blowers tested were found to be internally generating and emitting significant levels of airborne contaminants >0.3 µm in size (germ size), up to 35,272 particles per ft3 of air (80 million particles per hour). (View The Abstract)

Reed M, et al. Forced Air Warming Design: An Evaluation of Intake Filtration, Internal Microbial Build-Up, and Airborne-Contamination Emissions. 2013;81(4):275-280.
Micro-organisms were cultured from the internal air-flow paths of 100% of forced-air blowers tested. 100% of the blowers were emitting internally generated particles >0.3 µm in size, up to 112,000 particles per ft3 of air (300 million particles per hour). Emitted particle count was 40 times greater than the intake particle count for that blower, and virtually all of the emitted particles were internally generated. (View The Abstract)

Wood A.M., et al., Infection control hazards associated with the use of forced air warming in operating theatres, Journal of Hospital Infection. 2014 Nov;88(3):132-40.
A Review Article of the published experimental and clinical research into the infection control hazards of using forced-air warming (FAW) in operating theatres to prevent inadvertent hypothermia. “We conclude that FAW does contaminate ultra-clean air ventilation…we recommend that surgeons should at least consider alternative patient-warming systems in areas where contamination of the operative field may be critical.”(View The Abstract)

Moretti B, et al. Active warming systems to maintain perioperative normothermia in hip replacement surgery: a therapeutic aid or a vector of infections?  J Hosp Infect 2009;73:58-63
Researchers found an increased bacterial load at the surgical site when FAW was used.

Ayers P, et al. Reducing perioperative hypothermia in anesthetized patients. Accepted for publication in Veterinary Anesthesia and Analgesia
A veterinary study at Iowa State University. Twenty-eight dogs were treated either with Hot Dog warming above and below or a Bair Hugger blanket above and a water mattress below. 85.7% of the Hot Dog treated dogs were normothermic (normal temperature) at the end of surgery. Only 14.3% of the Bair Hugger treated dogs were normothermic at the end of the surgery.

Macario, A. and T.R. Clancy. “Computer simulation model of the economics of a reusable fabric technology warming blanket compared to a disposable forced-air warming blanket.” International Anesthesia Research Society (IARS). 2010.
A whitepaper presented at International Anesthesia Research Society (IARS) showed how HotDog patient warming can save users up to 70%. That analysis, by doctors at Stanford University and the University of Minnesota, included “soft costs” like time to clean HotDog blankets, disposal costs, and energy costs. (Macario Poster) 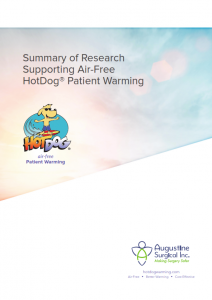 We use cookies on our website to give you the most relevant experience by remembering your preferences and repeat visits. By clicking “Accept”, you consent to the use of ALL the cookies.
Do not sell my personal information.
Cookie SettingsAccept
Manage consent

This website uses cookies to improve your experience while you navigate through the website. Out of these, the cookies that are categorized as necessary are stored on your browser as they are essential for the working of basic functionalities of the website. We also use third-party cookies that help us analyze and understand how you use this website. These cookies will be stored in your browser only with your consent. You also have the option to opt-out of these cookies. But opting out of some of these cookies may affect your browsing experience.
Necessary Always Enabled
Necessary cookies are absolutely essential for the website to function properly. These cookies ensure basic functionalities and security features of the website, anonymously.
Functional
Functional cookies help to perform certain functionalities like sharing the content of the website on social media platforms, collect feedbacks, and other third-party features.
Performance
Performance cookies are used to understand and analyze the key performance indexes of the website which helps in delivering a better user experience for the visitors.
Analytics
Analytical cookies are used to understand how visitors interact with the website. These cookies help provide information on metrics the number of visitors, bounce rate, traffic source, etc.
Advertisement
Advertisement cookies are used to provide visitors with relevant ads and marketing campaigns. These cookies track visitors across websites and collect information to provide customized ads.
Others
Other uncategorized cookies are those that are being analyzed and have not been classified into a category as yet.
SAVE & ACCEPT
Translate »